Jimmy Lewis
I am semi-retired after spending 30 years turning cartwheels in the backyard of Corporate America. I'm happily married, and between my wife, Andrea, and I, have 8 children and 9 grandchildren. I recently released 12 songs on the Touch Em All Production's CD "The Passion's Back". For info please visit: http://touch-em-all.net/. This blog, "Rouge Revival", pertains to my core belief that our nation's founding father's had it "right" and that the success of the auto industry was one of the many direct results of their vision. "Rouge" is French for the color "Red", which also symbolizes the color indicator for Republican states. Rouge is also the name of an historic river, here in SE Michigan, as well as, the name of the largest integrated factory complex in the world, which at one time employed 100,000 Ford Motor Workers. The "Revival" is my vision for both a successful rebound of the auto industry, along with a Republican Party led State of Michigan and Country! Oh yeah, and I hope to have and share a bit of fun within the process ... 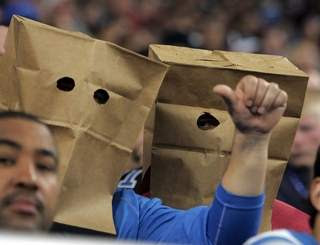 Our once proud … well fifty years ago once proud … National Football League franchise known as the Detroit Lie Downs (formerly the Detroit Lions) continued their traditional ways today by losing for the ninth straight time this season ... keeping them on pace to become the only team, in the history of the NFL, to go for an entire sixteen game schedule, without a victory.

Far worse, the Lions have managed to win just one playoff game in over a half of century. Believe me, you don’t have to look it up, it’s true. Fifty years and only one playoff victory. No one could make this stuff up. Since their last winning season in 2000 (posting a stunning 9 and 7 mark), the Lions have gone 31 and 90.

So you see … as a Lion fan, you are totally justified to wear that sack over your head. Which in essence, I guess, makes them a lyin’ fan.

However, as a Republican, there is absolutely no reason to hide your head in shame. Even though we took a couple of big hits in 2006 and 2008, there is so much to be proud of and so much to stand tall for, when your life is based upon conservative principles and beliefs.

In regards to last week’s election: When things go wrong, you must first look inward. You must ask, "What did we do wrong? What could we have done better? What mistakes did we make?" It would be foolish at this stage to start assigning blame either to the media or to liberals or Democrats or the voters or the American people. I'm not going to fall into the trap that the liberals and Democrats fall into every time they lose an election and start blaming everybody else. Republicans lost last week but conservatism did not, and that is to me, one of the fundamental elements of last week's results. Conservatism did not lose; Republicans lost last week. In fact, Republicanism, being a political party first rather than an ideological movement, is what lost. The Democrats beat something last week with nothing. They advanced no agenda other than their usual anti-war position, class envy and Robin Hood rhetoric. They have no contract. They really did not get specific. Their message was one of "Vote for us … because the other guys has been in power too long," There was no dominating conservative theory nationally, and, oh by the way, these were nationalized elections. There was no dominating conservative message that came from the top and filtered down throughout this campaign. It was nowhere to be found.

It’s not the Acorn folks, nor even those that come back from the dead to vote … The latest example of election fraud is actually what the Democrats did from within. They nominated a bunch of moderate and conservative Democrats for the express purpose of electing a far-left Democrat leadership. If you're looking for a good side, Democrats could not win this election being liberals. They could not have won the House being liberals. Maybe in some parts of the country, but all the Democrats flexing their muscles and feeling good about this have to admit here that liberalism didn't win anything last week.

True Conservatism just wasn't utilized in this campaign, and there are many reasons for it, but the primary reason is fear of criticism from those in the so-called establishment, and nobody wants to be criticized and nobody wants to go through life in fear, so a lot of people go out of their way to make our opponents think, "Well, I'm not that bad a guy. I'm not really one of those extreme kooks. I'm reasonable." So the whole ideology of conservatism gets watered down within the threat of fear and the desire to be liked and all of this, and the Democrats now get to tell themselves whatever they want to tell themselves why they won. Did they think they won because they're liberals? Will they be honest with themselves and tell themselves they won because they had the opportunity to run against nothing? Anything can beat nothing, and that’s precisely what happened last week.

My whole point in saying this is: Don't turn over your life to government. Whether you're a conservative or a liberal, don't expect that only good things can happen to you or you can only succeed if the right things are happening with government. That is not true. There is no reason to put your arms up in despair and think your life is over or your future is bleak simply because of this. We've been here too many times.

I'm not saying, "Forget what happens. Get out of the game." Some of you probably want to do that, but there are too many defeats in life; there are too many losses in life that are outside your own life to let them have an effect on you, a profound effect for a long time. Sure there's disappointment ... so allow yourself to feel it. Go ahead and experience it. It will motivate you to not want to go through it again and see what you can do. All these things have the opportunity for good in them, and they all have the opportunity for learning.

The Republican Party is going to do far better when it is openly proud and willing to define in every speech it makes what conservatism is, leading people to that movement, making them feel like there's a future, making them feel proud of themselves, making them happy to be Americans.

We all know that there are very positive things happening out there, but it was not trumpeted by the people who should have been shouting it from the rooftops because they were proud of it … instead of hiding under some bag.

However, if you’re a Detroit Lion loyalist, you may just want to hold onto that bag for another half century. 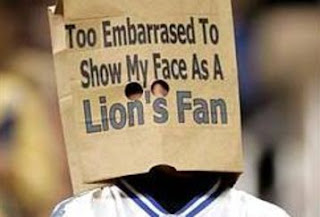 Like we say down here in Atlanta, Fire Millen !